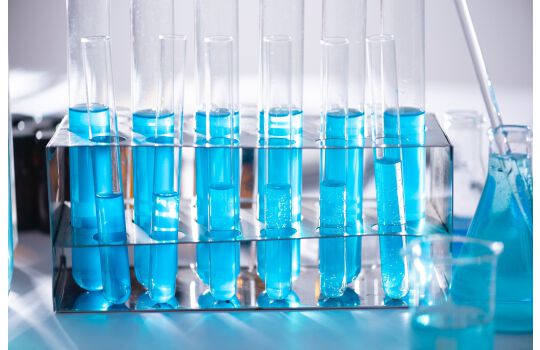 Phthalic anhydride is the organic compound with the formula C6H4(CO)2O. It is the anhydride of phthalic acid. Phthalic anhydride is a principal commercial form of phthalic acid. It was the first anhydride of a dicarboxylic acid to be used commercially. This colourless solid is an important industrial chemical, especially for the large-scale production of plasticizers for plastics. In 2000, the worldwide production volume was estimated to be about 3 million tonnes per year.[4]

Quinoline Yellow SS is a popular dye derived from the condensation of phthalic anhydride and 2-methylquinoline.
Phthalic anhydride is widely used in industry for the production of certain dyes. A well-known application of this reactivity is the preparation of the anthroquinone dye quinizarin by reaction with para-chlorophenol followed by hydrolysis of the chloride.[5] Phenolphthalein can be synthesized by the condensation of phthalic anhydride with two equivalents of phenol under acidic conditions (hence the name). It was discovered in 1871 by Adolf von Baeyer.[6][7][8]

Reactions
Phthalic anhydride is a versatile intermediate in organic chemistry, in part because it is bifunctional and cheaply available.

Chiral alcohols form half-esters (see above), and these derivatives are often resolvable because they form diastereomeric salts with chiral amines such as brucine.[13] A related ring-opening reaction involves peroxides to give the useful peroxy acid:[14] Phthalimide can be prepared by heating phthalic anhydride with aqueous ammonia giving 95–97% yield. Alternatively, it may be prepared by treating the anhydride with ammonium carbonate or urea. It can also be produced by ammoxidation of o-xylene.[15] Potassium phthalimide is commercially available and is the potassium salt of phthalimide. It may be prepared by adding a hot solution of phthalimide to a solution of potassium hydroxide; the desired product precipitates.[16]

Phthalic anhydride is a precursor to a variety of reagents useful in organic synthesis. Important derivatives include phthalimide and its many derivatives.

Preparation of aliphatic nitroalkenes
Phthalic anhydride is used to dehydrate short-chain nitro-alcohols to yield nitroalkenes, compounds with a high tendency to polymerize.[17]