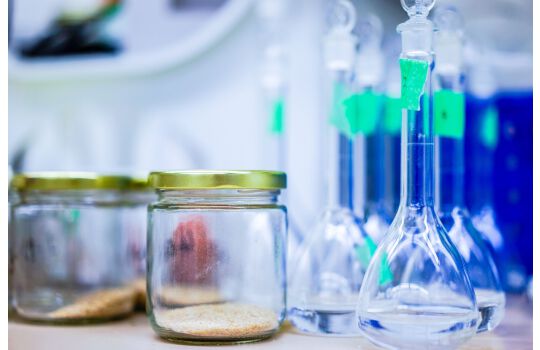 Nonylphenols, from the Latin nōnus (number 9) and phenol, are a family of closely related organic compounds composed of phenol bearing a 9 carbon-tail. Nonylphenols can come in numerous structures, all of which may be considered alkylphenols. They are used in manufacturing antioxidants, lubricating oil additives, laundry and dish detergents, emulsifiers, and solubilizers.[2] These compounds are also precursors to the commercially important non-ionic surfactants alkylphenol ethoxylates and nonylphenol ethoxylates, which are used in detergents, paints, pesticides, personal care products, and plastics. Nonylphenol has attracted attention due to its prevalence in the environment and its potential role as an endocrine disruptor and xenoestrogen, due to its ability to act with estrogen-like activity.[3] The estrogenicity and biodegradation heavily depends on the branching of the nonyl sidechain.[4][5][6] Nonylphenol has been found to act as an agonist of the GPER (GPR30).[7]

Contents
1    Structure and basic properties
2    Production
3    Applications
4    Prevalence in the environment
4.1    Environmental hazards
5    Human health hazards
5.1    Effects in pregnant women
5.2    Effects on metabolism
5.3    Cancer
5.4    Human exposure and breakdown
5.4.1    Exposure
5.4.2    Breakdown
6    Analytics
7    Regulation
8    References
Structure and basic properties
Nonylphenols fall into the general chemical category of alkylphenols.[8] The structure of NPs may vary. The nonyl group can be attached to the phenol ring at various locations, usually the 4- and, to lesser extent, the 2-positions, and can be either branched or linear. A branched nonylphenol, 4-nonylphenol, is the most widely produced and marketed nonylphenol.[9] The mixture of nonylphenol isomers is a pale yellow liquid, although the pure compounds are colorless. The nonylphenols are moderately soluble in water [9] but soluble in alcohol.

Nonylphenol arises from the environmental degradation of nonylphenol ethoxylates, which are the metabolites of commercial detergents called alkylphenol ethoxylates. NPEs are a clear to light orange color liquid. Nonylphenol ethoxylates are nonionic in water, which means that they have no charge. Because of this property they are used as detergents, cleaners, emulsifiers, and a variety of other applications. They are amphipathic, meaning they have both hydrophilic and hydrophobic properties, which allows them to surround non-polar substances like oil and grease, isolating them from water.[2]

Production
Nonylphenol can be produced industrially, naturally, and by the environmental degradation of alkylphenol ethoxylates. Industrially, nonylphenols are produced by the acid-catalyzed alkylation of phenol with a mixture of nonenes. This synthesis leads to a very complex mixture with diverse nonylphenols.[10][11][12] Theoretically there are 211 constitutional isomers and this number rise to 550 isomers if we take the enantiomers into account.[4] To make NPEs, manufacturers treat NP with ethylene oxide under basic conditions.[9] Since its discovery in 1940, nonylphenol production has increased exponentially, and between 100 and 500 million pounds of nonylphenol are produced globally every year,[9][13] meeting the definition of High Production Volume Chemicals.

Nonylphenols are also produced naturally in the environment. One organism, the velvet worm, produces nonylphenol as a component of its defensive slime. The nonylphenol coats the ejection channel of the slime, stopping it from sticking to the organism when it is secreted. It also prolongs the drying process long enough for the slime to reach its target.[14]

Another surfactant called nonoxynol, which was once used as intravaginal spermicide and condom lubricant, was found to metabolize into free nonylphenol when administered to lab animals.[8]

Applications
Nonylphenol is used in manufacturing antioxidants, lubricating oil additives, laundry and dish detergents, emulsifiers, and solubilizers.[2] It can also be used to produce tris(4-nonyl-phenyl) phosphite (TNPP), which is an antioxidant used to protect polymers, such as rubber, Vinyl polymers, polyolefins, and polystyrenics in addition to being a stabilizer in plastic food packaging. Barium and calcium salts of nonylphenol are also used as heat stabilizers for polyvinyl chloride (PVC).[15] Nonylphenol is also often used an intermediate in the manufacture of the non-ionic surfactants nonylphenol exthoxylates, which are used in detergents, paints, pesticides, personal care products, and plastics. Nonylphenol and nonylphenol ethoxylates are only used as components of household detergents outside of Europe.[2] Nonyl Phenol, is used in many epoxy formulations mainly in North America.

Prevalence in the environment
Nonylphenol persists in aquatic environments and is moderately bioaccumulative. It is not readily biodegradable, and it can take months or longer to degrade in surface waters, soils, and sediments. Nonbiological degradation is negligible.[3] Many products that contain nonylphenol have "down-the-drain" applications, such as laundry and dish soap, so the contaminants are frequently introduced into the water supply. In sewage treatment plants, nonylphenol ethoxylate degrades into nonylphenol, which is found in river water and sediments as well as soil and groundwater.[16] Nonylphenol photodegrades in sunlight, but its half-life in sediment is estimated to be more than 60 years. Although the concentration of nonylphenol in the environment is decreasing, it is still found at concentrations of 4.1 μg/L in river waters and 1 mg/kg in sediments.[2]

Bioaccumulation is significant in water-dwelling organisms and birds, and nonylphenol has been found in internal organs of certain animals at concentrations of 10 to 1,000 times greater than the surrounding environment.[3] Due to this bioaccumulation and persistence of nonylphenol, it has been suggested that nonylphenol could be transported over long distances and have a global reach that stretches far from the site of contamination.[17]

Nonylphenol is not persistent in air, as it is rapidly degraded by hydroxyl radicals.[3]

Environmental hazards
Nonylphenol is considered to be an endocrine disruptor due to its ability to mimic estrogen and in turn disrupt the natural balance of hormones in affected organisms.[4][5][6][18][19][20] The effect is weak because nonylphenols are not very close structural mimics of estradiol, but the levels of nonylphenol can be sufficiently high to compensate.

Structure of the hormone estradiol and one of the nonylphenols.
The effects of nonylphenol in the environment are most applicable to aquatic species. Nonylphenol can cause endocrine disruption in fish by interacting with estrogen receptors and androgen receptors. Studies report that nonylphenol competitively displaces estrogen from its receptor site in rainbow trout.[21] It has a stronger affinity to the E2 receptor than estrogen.[21] Nonylphenol causes the feminization of aquatic organisms, decreases male fertility, and decreases survival in young fish.[2] Studies show that male fish exposed to nonylphenol have lower testicular weight.[21] Nonylphenol can disrupt steroidogenesis in the liver. One function of endogenous estrogen in fish is to stimulate the liver to make vitellogenin, which is a phospholipoprotein.[21] Vitellogenin is released by the maturing female and sequestered by developing oocytes to produce the egg yolk.[21] Males do not normally produce vitellogenin, but when exposed to nonylphenol they produce similar levels of vitellogenin to females.[21] The concentration needed to induce vitellogenin production in fish is 10 ug/L for NP in water.[21] Nonylphenol can also interfere with the level of FSH (follicle-stimulating hormone) being released from the pituitary gland. Concentrations of NP that inhibit reproductive development and function in fish also damages kidneys, decreases body weight, and induces stressed behavior.[22]

Human health hazards
Alkylphenols like nonylphenol and bisphenol A have estrogenic effects in the body. They are known as xenoestrogens.[23] Estrogenic substances and other endocrine disruptors are compounds that have hormone-like effects in both wildlife and humans. Xenoestrogens usually function by binding to estrogen receptors and acting competitively against natural estrogens. Nonylphenol has been shown to mimic the natural hormone 17β-estradiol, and it competes with the endogeous hormone for binding with the estrogen receptors ERα and ERβ.[2] Nonylphenol was discovered to have hormone-like effects by accident because it contaminated other experiments in laboratories that were studying natural estrogens that were using polystyrene tubes.[8]