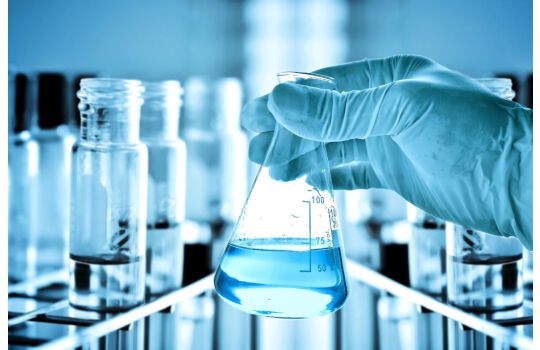 Boric acid, also called hydrogen borate, boracic acid, orthoboric acid and acidum boricum, is a weak, monobasic Lewis acid of boron, which is often used as an antiseptic, insecticide, flame retardant, neutron absorber, or precursor to other chemical compounds. It has the chemical formula H3BO3 (sometimes written B(OH)3), and exists in the form of colorless crystals or a white powder that dissolves in water. When occurring as a mineral, it is called sassolite.

Occurrence
Boric acid, or sassolite, is found mainly in its free state in some volcanic districts, for example, in the Italian region of Tuscany, the Lipari Islands and the US state of Nevada. In these volcanic settings it issues, mixed with steam, from fissures in the ground. It is also found as a constituent of many naturally occurring minerals – borax, boracite, ulexite (boronatrocalcite) and colemanite. Boric acid and its salts are found in seawater. It is also found in plants, including almost all fruits.[2]

Boric acid was first prepared by Wilhelm Homberg (1652–1715) from borax, by the action of mineral acids, and was given the name sal sedativum Hombergi ("sedative salt of Homberg"). However borates, including boric acid, have been used since the time of the ancient Greeks for cleaning, preserving food, and other activities.[citation needed]

Preparation
Boric acid may be prepared by reacting borax (sodium tetraborate decahydrate) with a mineral acid, such as hydrochloric acid: