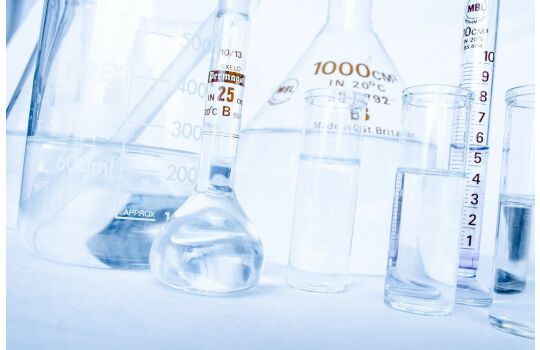 Benzoic acid /bɛnˈzoʊ.ɪk/, C7H6O2 (or C6H5COOH), is a colorless crystalline solid and a simple aromatic carboxylic acid. The name is derived from gum benzoin, which was for a long time its only known source. Benzoic acid occurs naturally in many plants[8] and serves as an intermediate in the biosynthesis of many secondary metabolites. Salts of benzoic acid are used as food preservatives and benzoic acid is an important precursor for the industrial synthesis of many other organic substances. The salts and esters of benzoic acid are known as benzoates /ˈbɛnzoʊ.eɪt/.

History
Benzoic acid was discovered in the sixteenth century. The dry distillation of gum benzoin was first described by Nostradamus (1556), and then by Alexius Pedemontanus (1560) and Blaise de Vigenère (1596).[9]

Pioneer work in 1830 through a variety of experiences based on amygdalin, obtained from bitter almonds (the fruit of Prunus dulcis) oil by Pierre Robiquet and Antoine Boutron-Charlard, two French chemists, had produced benzaldehyde [10] but they failed in working out a proper interpretation of the structure of amygdalin that would account for it, and thus missed the identification of the benzoyl radical C7H5O. This last step was achieved some few months later (1832) by Justus von Liebig and Friedrich Wöhler, who determined the composition of benzoic acid.[11] These latter also investigated how hippuric acid is related to benzoic acid.

In 1875 Salkowski discovered the antifungal abilities of benzoic acid, which was used for a long time in the preservation of benzoate-containing cloudberry fruits.[12]

It is also one of the chemical compounds found in castoreum. This compound is gathered from the castor sacs of the North American beaver.

Production
Industrial preparations
Benzoic acid is produced commercially by partial oxidation of toluene with oxygen. The process is catalyzed by cobalt or manganese naphthenates. The process uses abundant materials, and proceeds in high yield.[13]

Benzoic acid can be purified by recrystallization from water because of its high solubility in hot water and poor solubility in cold water. The avoidance of organic solvents for the recrystallization makes this experiment particularly safe. This process usually gives a yield of around 65% [14] The solubility of benzoic acid in over 40 solvents with references to original sources can be found as part of the Open Notebook Science Challenge.[15]

By hydrolysis
Like other nitriles and amides, benzonitrile and benzamide can be hydrolyzed to benzoic acid or its conjugate base in acid or basic conditions.

From benzaldehyde
The base-induced disproportionation of benzaldehyde, the Cannizzaro reaction, affords equal amounts of benzoate and benzyl alcohol; the latter can be removed by distillation.

Cannizzaro reaction-benzaldehyde.svg
From bromobenzene
Bromobenzene can be converted to benzoic acid by "carboxylation" of the intermediate phenylmagnesium bromide.[16] This synthesis offers a convenient exercise for students to carry out a Grignard reaction, an important class of carbon–carbon bond forming reaction in organic chemistry.[17][18][19][20][21]

From benzyl alcohol
Benzyl alcohol is refluxed with potassium permanganate or other oxidizing reagents in water. The mixture is hot filtered to remove manganese dioxide and then allowed to cool to afford benzoic acid.

Uses
Benzoic acid is mainly consumed in the production of phenol by oxidative decarboxylation at 300−400 °C:[22]

C6H5CO2H +
1
/
2
O2 → C6H5OH + CO2
The temperature required can be lowered to 200 °C by the addition of catalytic amounts of copper(II) salts. The phenol can be converted to cyclohexanol, which is a starting material for nylon synthesis.

Precursor to plasticizers
Benzoate plasticizers, such as the glycol-, diethyleneglycol-, and triethyleneglycol esters, are obtained by transesterification of methyl benzoate with the corresponding diol. Alternatively these species arise by treatment of benzoylchloride with the diol. These plasticizers are used similarly to those derived from terephthalic acid ester.

Precursor to sodium benzoate and related preservatives
Benzoic acid and its salts are used as a food preservatives, represented by the E-numbers E210, E211, E212, and E213. Benzoic acid inhibits the growth of mold, yeast[23] and some bacteria. It is either added directly or created from reactions with its sodium, potassium, or calcium salt. The mechanism starts with the absorption of benzoic acid into the cell. If the intracellular pH changes to 5 or lower, the anaerobic fermentation of glucose through phosphofructokinase is decreased by 95%. The efficacy of benzoic acid and benzoate is thus dependent on the pH of the food.[24] Acidic food and beverage like fruit juice (citric acid), sparkling drinks (carbon dioxide), soft drinks (phosphoric acid), pickles (vinegar) or other acidified food are preserved with benzoic acid and benzoates.

Typical levels of use for benzoic acid as a preservative in food are between 0.05–0.1%. Foods in which benzoic acid may be used and maximum levels for its application are controlled by local food laws.[25][26]

Concern has been expressed that benzoic acid and its salts may react with ascorbic acid (vitamin C) in some soft drinks, forming small quantities of benzene.[27]

See also: Benzene in soft drinks
Medicinal
Benzoic acid is a constituent of Whitfield's ointment which is used for the treatment of fungal skin diseases such as tinea, ringworm, and athlete's foot.[28][29] As the principal component of gum benzoin, benzoic acid is also a major ingredient in both tincture of benzoin and Friar's balsam. Such products have a long history of use as topical antiseptics and inhalant decongestants.

Benzoic acid was used as an expectorant, analgesic, and antiseptic in the early 20th century.[30]

Niche and laboratory uses
In teaching laboratories, benzoic acid is a common standard for calibrating a bomb calorimeter.[31]

Benzoic acid occurs naturally as do its esters in many plant and animal species. Appreciable amounts have been found in most berries (around 0.05%). Ripe fruits of several Vaccinium species (e.g., cranberry, V. vitis macrocarpon; bilberry, V. myrtillus) contain as much as 0.03–0.13% free benzoic acid. Benzoic acid is also formed in apples after infection with the fungus Nectria galligena. Among animals, benzoic acid has been identified primarily in omnivorous or phytophageous species, e.g., in viscera and muscles of the rock ptarmigan (Lagopus muta) as well as in gland secretions of male muskoxen (Ovibos moschatus) or Asian bull elephants (Elephas maximus).[35]

Benzoic acid is present as part of hippuric acid (N-benzoylglycine) in urine of mammals, especially herbivores (Gr. hippos = horse; ouron = urine). Humans produce about 0.44 g/L hippuric acid in their urine, and if the person is exposed to toluene or benzoic acid, it can rise above that level.[38]

For humans, the World Health Organization's International Programme on Chemical Safety (IPCS) suggests a provisional tolerable intake would be 5 mg/kg body weight per day.[35] Cats have a significantly lower tolerance against benzoic acid and its salts than rats and mice. Lethal dose for cats can be as low as 300 mg/kg body weight.[39] The oral LD50 for rats is 3040 mg/kg, for mice it is 1940–2263 mg/kg.[35]

In Taipei, Taiwan, a city health survey in 2010 found that 30% of dried and pickled food products had benzoic acid.[40]

Reactions
Reactions of benzoic acid can occur at either the aromatic ring or at the carboxyl group:

Carboxyl group
All the reactions mentioned for carboxylic acids are also possible for benzoic acid.

Benzoic acid esters are the product of the acid catalysed reaction with alcohols.
Benzoic acid amides are more easily available by using activated acid derivatives (such as benzoyl chloride) or by coupling reagents used in peptide synthesis like DCC and DMAP.
The more active benzoic anhydride is formed by dehydration using acetic anhydride or phosphorus pentoxide.
Highly reactive acid derivatives such as acid halides are easily obtained by mixing with halogenation agents like phosphorus chlorides or thionyl chloride.
Orthoesters can be obtained by the reaction of alcohols under acidic water free conditions with benzonitrile.
Reduction to benzaldehyde and benzyl alcohol is possible using DIBAL-H, LiAlH4 or sodium borohydride.
The copper catalysed decarboxylation of benzoate to benzene may be effected by heating in quinoline. Also, Hunsdiecker decarboxylation can be achieved by forming the silver salt and heating. Benzoic acid can also be decarboxylated by heating with an alkali hydroxide or calcium hydroxide.