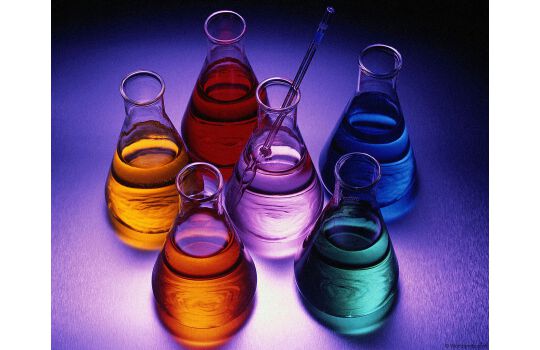 Acetone (propanone) is the organic compound with the formula (CH3)2CO.[12] It is a colorless, volatile, flammable liquid, and is the simplest and smallest ketone.

Acetone is miscible with water and serves as an important solvent in its own right, typically for cleaning purposes in laboratories. About 6.7 million tonnes were produced worldwide in 2010, mainly for use as a solvent and production of methyl methacrylate and bisphenol A.[13][14] It is a common building block in organic chemistry. Familiar household uses of acetone are as the active ingredient in nail polish remover, and as paint thinner.

Acetone is produced and disposed of in the human body through normal metabolic processes. It is normally present in blood and urine. People with diabetes produce it in larger amounts. Reproductive toxicity tests show that it has low potential to cause reproductive problems. Ketogenic diets that increase ketones (acetone, β-hydroxybutyric acid and acetoacetic acid) in the blood are used to counter epileptic attacks in infants and children who suffer from recalcitrant refractory epilepsy.Production
In 2010, the worldwide production capacity for acetone was estimated at 6.7 million tonnes per year.[29] With 1.56 million tonnes per year, the United States had the highest production capacity,[30] followed by Taiwan and mainland China. The largest producer of acetone is INEOS Phenol, owning 17% of the world's capacity, with also significant capacity (7–8%) by Mitsui, Sunoco and Shell in 2010.[29] INEOS Phenol also owns the world's largest production site (420,000 tonnes/annum) in Beveren (Belgium). Spot price of acetone in summer 2011 was 1100–1250 USD/tonne in the United States.[31]